Staying in Canada: 5 Things You Should Know 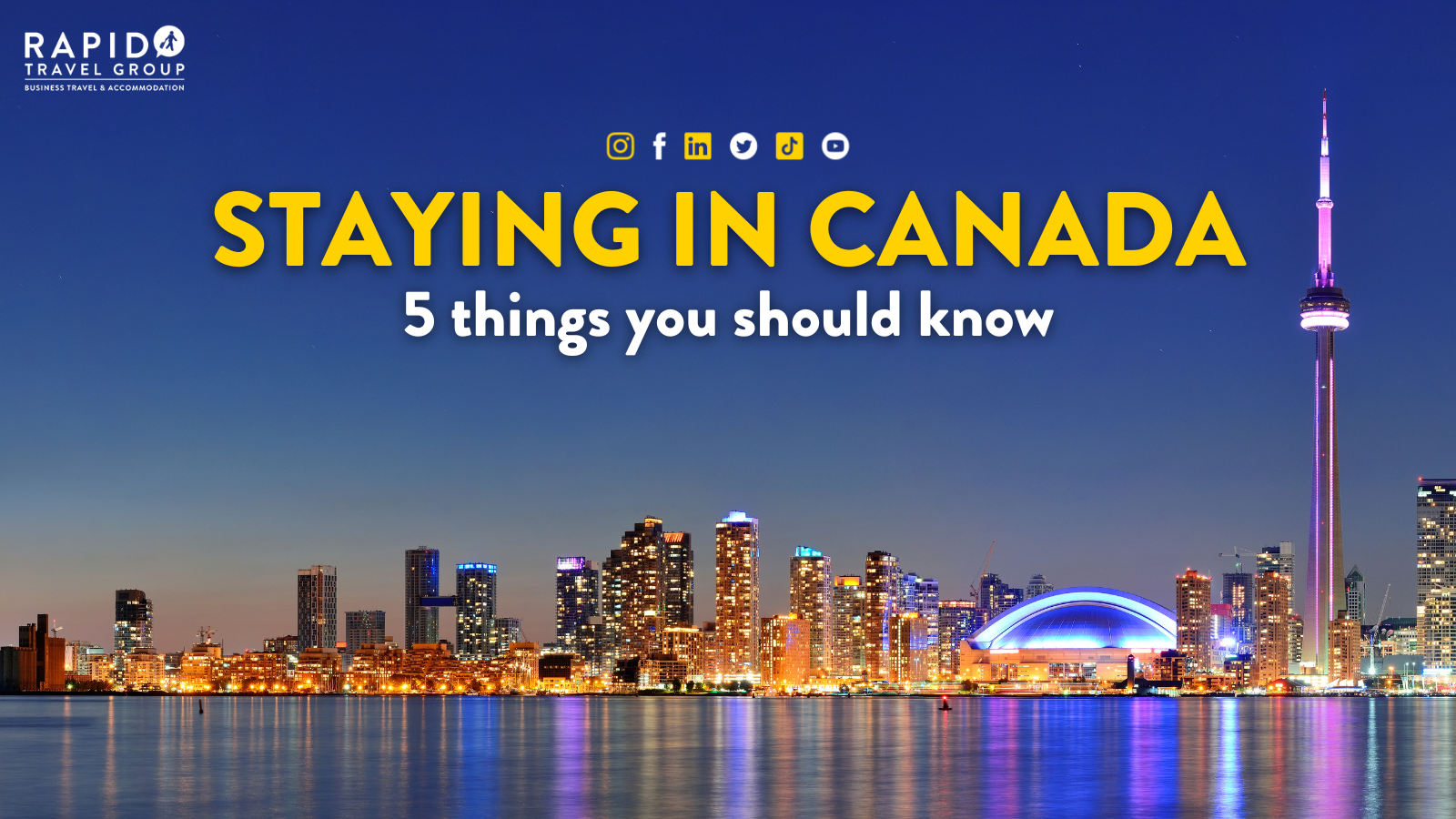 Staying & working in Canada can be nerve-racking if you don’t already know much about the country. Here’s five things you should know before you get to the airport:

The Rules for Visiting Canada

One of the first things you should know is that you need proof of your COVID-19 vaccination in order to enter Canada. You will also most likely need a VISA. You should also be aware that the laws in Canada can vary by province, including the legal drinking age. This means that your younger team members might not be able to join you at the pub after work.

Find out if you need a VISA!

Canada is a Very Big Country!

Canada is the second largest country in the world and actually comprises seven different climatic zones / time zones. With seven different zones it’s important to research the area you are going to and check what the weather might be like. Canada might be known for its snow but it also has sand dunes so weather can vary dramatically. If you are going to one of the coldest areas, your regular winter coat probably won’t cut it. It’s a good idea to invest in some snowshoes and ski clothes. While Toronto might be its most well known city and also the highest population, the capital city is actually Ottawa. Canada also has two official languages; French and English. It’s a good idea to check which one is primarily used in the area you are going to. Being unused to such great distances between places, it’s a good idea to double check the distance between places and remember that ‘just down the road’ could be miles away.

There are a few cultural differences to be aware of when staying in Canada. One of these is that generally the most popular sport is Ice Hockey. This means that when making small talk with your associates, football might not be a great topic of choice. Canada also fully uses the metric system (unlike our way of picking & choosing what is in metric or imperial), so when ordering material remember to stick to metric and don’t order ‘a pint’. Canada is also very culturally diverse. This is because they have a very low population number in comparison to the size of the country, so immigration is welcomed. Much like the US, tipping at restaurants in a large percentage is also considered mandatory in Canada. Should you buy milk while there, you might also be shocked to find that they buy their milk in bags.

For your own safety it’s a good idea to be aware of the more dangerous aspects of wildlife in Canada, especially if you are working somewhere more remote. For starters Canada has bears, wolves, cougars, coyotes, venomous snakes, venomous spiders, and moose (which while generally gentle, are massive and could easily injure you when startled). It’s important to leave the wildlife alone and be aware of where the nearest hospital is if you are likely to come across any of these animals. You should also remember to never try to run away from a bear as they can run as fast as a racehorse, even uphill. Stay still, talk calmly and slowly wave your arms; all helping the bear identify you as human. If the bear stands on its rear legs, it is only curious and not attempting to be threatening. Move away slowly and sideways.

Other Things to Remember

When you book through Rapid you don’t need to worry about finding the ideal and most cost-effective place to stay; just let us handle it!