Staying in Australia: What You Need to know 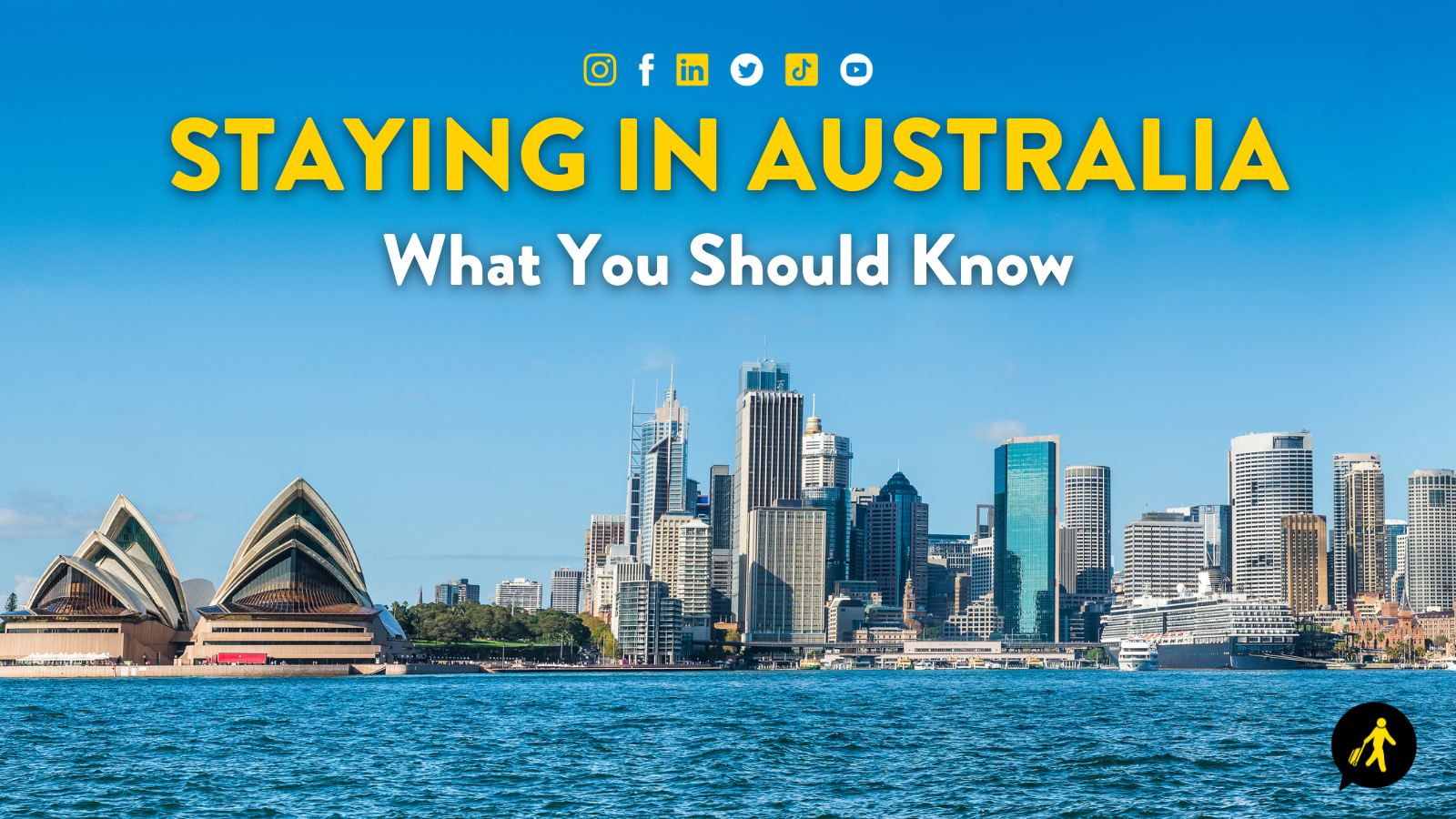 Staying in Australia can be nerve-racking, it is on the other side of the world after all. So many things will be different! Here’s an extensive list of things you should know before getting on the plane:

The Culture When Staying in Australia

The main thing that will help your trip go smoothly is an understanding of some key cultural differences. To begin with it’s a good idea to learn some basic slang (not just the stereotypical ones) to make sure you are understood and that you understand others. Some good ones to remember are; ‘arvo’ meaning afternoon, ‘chook’ meaning chicken, and ‘milk bar’ meaning a corner shop.

Another thing to remember is the tipping culture. It might be tempting to think of Australia like the US, but tipping isn’t common in Oz, especially at the high amount usually expected in the States. Nothing is stopping you from leaving a tip, but it isn’t expected. It’s also not necessary, minimum wage is equivalent to just under £10 an hour.

You’ll inevitably get at least one day off during your trip and considering Oz has over 10,000 beaches you’re likely to visit one of them. The main thing to remember when visiting an Australian beach is to be mindful of the flags. Always swim between the flags (that’s where it is safest) and check for any signs warning you not to go in the water.

You should also remember that you can’t buy alcohol at the supermarket in Australia. Some supermarkets have a small alcohol shop next door, but not all of them. You can also find alcohol at a Bottle-O, which is similar to an off-licence or a drive-through alcohol shop. It’s still illegal to drink & drive but it’s not abnormal to buy alcohol through your car window.

Need to visit several parts of the country? Don’t worry about it. Despite Australia’s vast size (the distance between Sydney & Perth is greater than between Moscow & Paris), it’s actually quite easy to get around. There are many domestic airlines & train routes connecting the major cities. There are also ferries which can take you from one coastal town to another without any drama.

It’s also a good idea to remember that each area has a different way to pay for public transport. In Melbourne you will need a Myki card, in Sydney you will need an Opal card and a Go card for Brisbane. Although, if you’d rather drive you should be reassured to know that they drive on the left-hand side of the road.

Using Your Phone in Oz

The best way to use your phone when staying in Australia (especially the more remote parts) is to purchase a Telstra pay-as-you-go sim card, the company with the widest coverage in the country. If you’d rather just use your phone as usual, it’s worth giving your supplier a ring and seeing if you can get a deal on minutes/data while you’re away. Some suppliers, such as Three, give you free data usage in Australia up to 12GB of data. For other suppliers you can usually check the charges on their website.

Whether you’re heading to Sydney, Melbourne, Adelaide or Perth; we can make sure your travel & accommodation is perfect for you and your company. Just let us know your requirements and we’ll sort the rest!

Staying in the US? Here’s some tips!