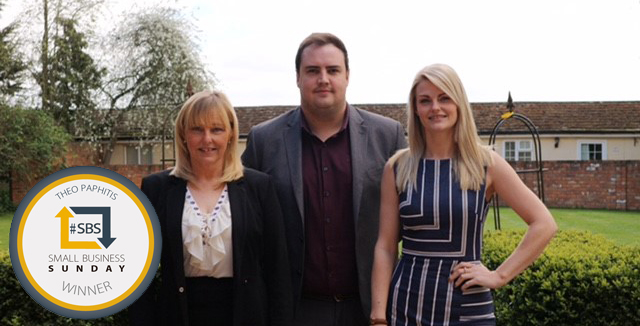 Rapid Accommodation picked as an #SBS Winner on Twitter by Dragon’s Den Star.

A Grimsby agency is the latest winner of a Dragon’s Den star’s Small Business Sunday initiative.

Rapid Accommodation, who source accommodation for business stays across the UK, were one of six companies to have caught the attention of entrepreneur Theo Paphitis in the weekly Twitter competition, which is open to businesses all around the world.

Small Business Sunday, which was created by Mr Paphitis, is an opportunity for users to showcase their brand in a single tweet using the hashtag #SBS. Every Sunday between 5pm and 7.30pm, businesses send their update to Mr Paphitis, who reviews the entries and chooses six winners, sharing the winning updates to his 505,000 followers the following night. In addition to Theo’s Twitter promotion, the team at Rapid Accommodation will get to meet Mr Paphitis and have access to exclusive support and networking opportunities.

Rebecca Anderson-Smith, Relationship Director of Rapid Accommodation said: “We have been tweeting every week for two and a half years in the hope that we would be chosen for the Small Business Sunday award, and finally all the persistence and hard work has paid off! We are over the moon to be recognised by Theo Paphitis and feel it has given us an amazing platform for Rapid Accommodation.

“It’s been an absolute whirlwind since the announcement on Monday night, and our twitter hasn’t stopped! We are looking forward to meeting Theo and thanking him in person – and maybe even try and book his accommodation for him!”

Currently, Rapid Accommodation are believed to be the only accommodation-finding service to have been picked as an #SBS winner. They join the likes of the fellow Grimsby-based winners, Red Herring Games and Scrubbys Crisps.

Since launching in 2012, Rapid Accommodation has gone from strength-to-strength. This win follows a period of growth after securing £2 million worth of new work with renowned organisations in the renewables and petrochemical industries, and the expansion of its team, taking the number of employees to nine. In 2016, the Ashby-cum-Fenby business was shortlisted as a finalist in the ABP Business Growth category in the Northern Lincolnshire Business Awards.